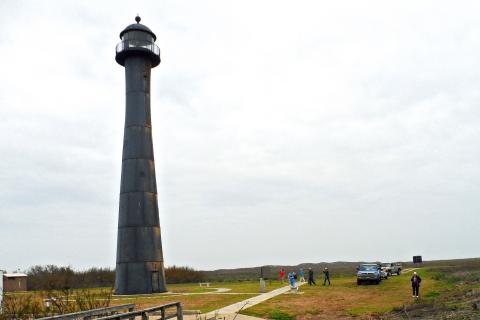 Before Texas became a state, a safe entrance into Pass Cavallo depended on the pilots' beacons on the beach and the survival of a lone tree on Matagorda Island. Sailing instructions published in 1841 instructed visiting ships to line the beacons up with the old tree in order to clear the bar. Once past the bar, however, ships still had to pass a number of treacherous shoals inside the entrance. The Republic of Texas proposed a lighthouse at the pass, but deferred action while statehood was being decided. Once Texas achieved statehood in 1845, the Fifth Auditor began considering options for making Pass Cavallo permanently navigable. In 1847, a buoy was placed at the entrance, and that same year Congress authorized $15,000 for a lighthouse on Matagorda Island.

The project was soon stalled once again, as disputes ensued over ownership of the land on the northern tip of the island. The federal government acquired five acres in December of 1848, but the State of Texas dragged its feet on ceding jurisdiction of the land for several more years. The stalling got so bad that the Galveston customs collector publicly accused the Governor of Texas of intentionally sabotaging the lighthouse. A hot public debate was initiated, but eventually ended in November 1851 when the state approved federal land ownership.

Once construction was finally underway, the project was completed by the winter of 1852, and the lamp first lit on December 21 of that year. The tower was identical to the one at Bolivar Point, with a skin of iron plate lined with brick for added strength, insulation, and rust prevention. The lantern held a chandelier of 14 metallic reflectors 79 feet above sea level. Two years after its construction, the tower was painted with red, white, and black horizontal bands as a daymark.

In 1854, a massive hurricane blew through the area. Every wharf in Matagorda Bay was carried completely away, and the town of Matagorda disappeared. Pass Cavallo was left virtually untouched by the storm. The hurricane forced a high tide through the narrow mouth which such force that the channel was straightened and deepened by about two feet. The gale did damage the lighthouse apparatus and convinced the Lighthouse Board to move the keeper's dwelling to higher ground. The Board also recommended raising the lantern 24 feet and replacing the outdated reflectors with a Fresnel lens. Before reconstruction, the Board considered moving the lighthouse away from the eroding beach, but negotiations with the landowner failed, and the tower was instead elevated on its original site in 1858.

In 1861, the Confederate States customs collector at LaSalle reported that he had removed and crated the lens and revolving machinery from the Matagorda tower. These were eventually recovered by a Union agent shortly after the war. During the war, the station was taken over by troops under General John B. Magruder, commander of the District of Texas, who had a battery of four guns installed around what became a lookout tower. On Christmas Day 1862, Magruder ordered his men to blow up the lighthouse. The explosion heavily damaged the foundation and several iron plates, but the lighthouse withstood the shock. However, by the time the Federal lighthouse engineer arrived to reestablish the light, the damage done by the blast combined with erosion at the tower's base had caused it to begin canting slightly. The Board had no choice but to relocate the lighthouse. Upon dismantling it, workers stored the tower materials on the highest part of the island, where they remained until 1873. A wooden tower holding a revolving fifth-order Fresnel lens served passing ships from October 1865 until the tower could be rebuilt.

In the late 1860s, the State of Texas provided a new site almost two miles further inland. In 1870, workers were dispatched to move the tower materials from storage to the new site. Unfortunately, before they could begin erecting the tower, a yellow fever epidemic quarantined all of the workers. Work eventually resumed, but was halted again in 1872, when a shortage of funds prevented the completion of the new brick and concrete foundation. Finally, in March of 1873, money was made available for the tower's completion, and it was finished and relit on September 1 of that year.

In 1886, a hurricane shook the tower violently. The tide rose 11 feet and the tower stood in 4 feet of water. All but the keeper's dwelling and the lighthouse itself was destroyed. The keepers lost all of their tools, supplies, and fresh water. During the storm, the tower shook so wildly that a piece of the lens shook free and shattered on the lantern deck.

In 1956, the Coast Guard automated the Matagorda Island Lighthouse. In 1977, the lens was replaced, and the original lens moved to the Calhoun County Historical Museum in Port Lavaca.