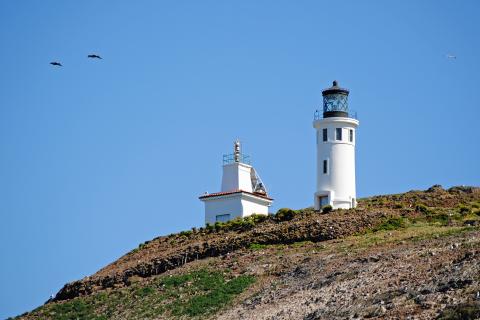 Anacapa’s 40-foot lighthouse tower and adjacent foghorn building are located on East Anacapa. It has a 1.1 million candlepower light beacon, and a foghorn and radio signal that have guided ships safely through the coastal channel since 1932, the date of construction. Prior to that an unattended light was placed on the island in 1912 as a guiding beacon for sailing vessels.

The foghorn, is a diaphragm-type horn, producing a one two second blast then is silent for two seconds, blasts again for two seconds and then completes the cycle with 14 seconds of silence during low visibility. Electronic equipment sends out a continual radio beacon signal with a range of 12 miles. The Coast Guardsmen and their families of the light station resided in the four large Spanish style white stucco houses with red tile roofs before the light station was automated in December, 1968.

The buildings other than the lighthouse are now being utilized by the National Park Service.