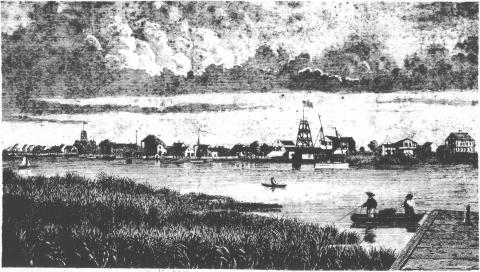 The first known marker to be placed in the Louisiana Territory was left by René-Robert Cavelier, Sieur de La Salle, who had drifted down the Mississippi from a northern French colony. In 1682, La Salle left a wooden beacon at the river's mouth, displaying the French coat of arms. Returning a few decades later, the French built a small fort in the marshes along the most important pass. This fort was known as La Balize, or "the Seamark." It is unknown when exactly the first light was shown from its lookout tower, but it is likely that the fort's inhabitants would have displayed various lights and banners to guide ships in.

In 1721, engineer Adrien de Pauger built a 62-foot unlit tower. He also drew plans for a crescent-shaped fort on Isle Toulouse, enclosing a hexagonal, two-story lighthouse, but the fort was never built. Over the next few decades, occupying French and Spanish authorities built several blockhouses and watchtowers. These probably showed at least small ship's lanterns or fired signal rockets, and certainly flew large banners to beckon in ships.

In the 1740s, all traces of human settlement were erased by strong gales. In the process the isle of San Carlos suddenly surfaced and became the site of the new Balize. A pyramidal structure was built out of wood, using posts 40 yards tall. The pyramid was to be used as a lighthouse, and was completed in 1767. It is unknown whether or not a light was ever shown from it, and the pyramid was destroyed by a hurricane in 1778 along with all other signs of the new Balize.

In 1794, the Spanish built a tall blockhouse to guide river traffic. By the time the United States acquired the territory in 1803, this tower was rotted and flooded. Some of the first U.S. officials sent to survey the new territory urged the Treasury Secretary to build a lighthouse downriver from Balize. William C.C. Claiborne, who was governor of the Louisiana Territory, asked Secretary of State James Madison to urge Congress for funds to mark the river.

Eventually, the U.S. Congress authorized $25,000 to repair the dilapidated tower and mount on it a light. However, chronic problems with other construction in the new territory delayed any work until the 1810s. In the meantime, pilots hoisted a broad flag above the blockhouse whenever a sail appeared on the horizon. In 1817, the New Orleans customs collector installed a temporary light in the tower. The light was extinguished in 1821 when the lightship Aurora Borealis arrived.

By the 1850s, the Northeast Pass had shoaled to uselessness, and the Balize settlement was abandoned. All vestiges of civilization were obliterated by a hurricane in 1865, and Balize was no more.