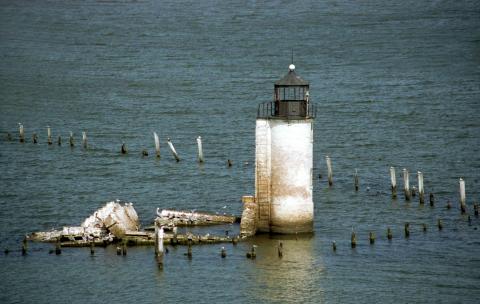 As part of a system of lights conceived to light Lake Pontchartrain in the early nineteenth-century, the Pass Manchac Light Station marks the entrance to nearby Lake Maurepas, just to the west of Lake Pontchartrain. The first iteration of the light was built in 1839 for $6,000. The tower of brick was built by Francis D. Gott of New Orleans, using the same generic plan as the Tchefuncte River Light.

After only three years the tower was in need of repair. The bricks had been laid in "mud mortar" rather than in lime and sand. Rainwater and lake surf had begun to disintegrate the tower's base, and a large hole was forming. The 1842 contract for rebuilding amounted to only $1,630, possibly implying that most of the original bricks were recycled into the second tower. The lake soon found its way into this tower too, covering the floor with nearly two feet of water. The Fifth Auditor recommended a wooden lighthouse on piers closer to the south side of the pass, but the third tower was eventually built adjacent to the original two foundations.

The third Pass Manchac tower was completed in February of 1846, based upon a design by George Bowditch, who likely based his design upon one that Winslow Lewis had sketched a few years previous for the Fifth Auditor. The station consisted of a 38-foot-by-19-foot two-story Victorian dwelling, built of local cypress, holding a cupola 8 feet in diameter jutting 5 feet from the center of the roof ridge. The cupola displayed a red light from its lantern, which was about 36 feet above the level of the lake.

This iteration, too, soon proved unable to withstand the lake. Even before the building was completed, it began to tilt toward the lake. Breakwaters failed to hold the waters back, and as the foundation began to fail the contractor was held liable and required to rebuild it. However, the building was unlikely to last long, and in 1855 the newly formed Lighthouse Board asked for a $10,000 appropriation to rebuild the lighthouse 200 feet to the northwest of its original location, in an area which seldom saw flooding. The board considered a screwpile tower, but eventually settled on a combination brick dwelling and tower. This fourth tower's brick foundation wall was three feet thick and eight feet tall, laid atop a timber grillage. The light was held 45 feet above the lake's surface, and was the only cylindrical brick tower built on the Gulf. Completed in 1857, the tower originally used old reflector lights for illumination. Eventually, the board supplied a fourth-order Fresnel lens, which was first displayed in 1859.

Though the Pass Manchac Light Station was finally safe from the water of the lake it was built to illuminate, it was not safe for long. The Civil War took a heavy toll on the tower. Confederate authorities removed the lens in September 1861, and Confederate soldiers occupying the tower damaged much of the other essential light equipment. A description of the required repairs seems to imply that a charge went off inside of the lantern, shattering the granite deck, breaking the lantern glass, and making necessary an entirely new apparatus. Engineer Max Bonzano reported that "all possible damage (was) done, such as carrying away doors, windows, breaking the lantern glass by making a target of it." Bonzano supplied the tower with a fifth order Fresnel lens and oversaw the repair and replacement of almost all of the woodwork in the station. The station was relit and fully operational in January 1867.

The station met with no significant incident for the rest of the nineteenth-century, and for the beginning of the twentieth. In 1941, Pass Manchac Light Station was automated. A small electrified lens was mounted on the lantern gallery. The Coast Guard decommissioned the light in 1987, and abandoned the property entirely soon after.

In August of 2012, Hurricane Isaac struck Louisiana and the Pass Manchac tower was toppled into Lake Pontchartrain.