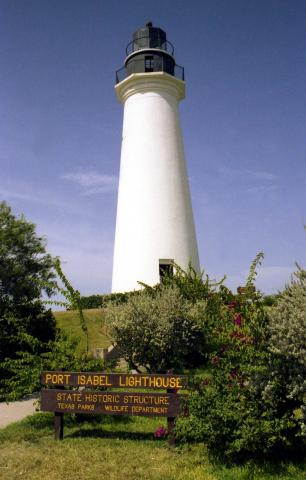 Port Isabel Light Station, one of the southernmost lighthouses in Texas, was first proposed in the late 1840s, when the Mexican War drew national attention to the Brazos Santiago as the last American stronghold before the Rio Grande. Once the government had approved a lighthouse at the pass, the more difficult task of selecting an appropriate location came to hand. One of several recommendations was that the main landfall light should be placed atop a sand mound on Padre Island, accompanied and complemented by a portable wooden beacon to form a range across the bar. The frugal port collector, John S. Rhea, thought the plan impracticable and costly, and instead preferred the hard clay bluff of Port Isabel's fort, an idea to which Texas Senator Sam Houston lent his considerable weight.

Selecting a site inside the fort's main bastion, about 25 feet above sea level, the Treasury Department contracted with John E. Carey of Brownsville to build the tower. By the time Carey completed the contract in 1853, the lighthouses of the United States were now under the authority of the newly formed Lighthouse Board. A crew dispatched by the board to install pieces of illuminating apparatus in new Texas lighthouses from Galveston to the Brazos Santiago lit the lighthouse in March of 1853, setting 15 old-style metallic reflectors 82 feet above the water. The light gained an excellent reputation as easily visible at sea over Padre Island's low sand hills. In 1857, the Lighthouse Board installed a rotating Fresnel lens of the third order, making the light visible up to 16 miles at sea.

During the Civil War, the tower was extinguished and used by Confederate forces to spy on Union ship movements. In 1862, Colonel John S. "Rip" Ford ordered the lens and fixtures to be taken down and carted off to Brownsville. He then had his men clear the area around the lighthouse, dig a trench, and mount two heavy cannon. On May 30, 1863, a force of 87 Union mariners approached the lightly manned Confederate works. To keep the tower from being captured by the Union, the vastly outnumbered Confederates attempted to destroy it by setting off a charge of gunpowder. The charge did little damage, but the Union forces retreated.

Five months later, Union forces again approached the tower, and the Confederates again attempted to blow it up. This time, the blast blew out the tower door and cracked the brickwork at the top. The brass clockwork for the revolving lens was damaged, but not irreparably. Once the tower was back in Union hands, repairs began in 1865. The original lens was reportedly smashed by frustrated ex-Confederates in Brownsville. A new third order lens was lit in 1866.

In 1881, a new, larger lantern was supplied for the Port Isabel light, and the top of the tower was corbelled outward to receive it.

In 1886, the lighthouse found itself thrust into local news when the "rightful" landowners of retired Fort Polk stepped forward and sued the lighthouse keeper for trespass. Apparently, General Taylor had built the fort on private property, and the War Department had failed to notify the Treasury Department of the private title when it transferred the fort to the Treasury in the 1850s. The Lighthouse Board balked when asked to buy the property, and decided instead to discontinue the lighthouse and abandon it, as the Brazos Santiago Light Station was sufficient for the port's traffic.

The public was outraged by the Board's decision, and quickly staged a campaign against the Board's action. Newspapers reported the dissatisfaction of the locals, and under pressure from mariners, politicians, and others, the Board reopened negotiations with the landowners. After 4 years of legal opinions, paperwork, and red tape, Justice Department lawyers were able to negotiate for purchase of the less than half an acre of land the lighthouse was on, paying $5,000. The lighthouse was reopened, and remained in service until 1905, when it was permanently discontinued.

This was because by 1905, railroads had cut shipping to almost nothing. Port Isabel mariners accused the railroads of subversion when the barge Luzon sank at the rail wharf. The barge blocked the turning basin and effectively shut the port down.

The lighthouse property was sold in 1928, and after extensive renovations in the 1950s, it became a State Historic Site and the focal point of Port Isabel. It is currently the only lighthouse in Texas maintained especially to attract visitors instead of ships.