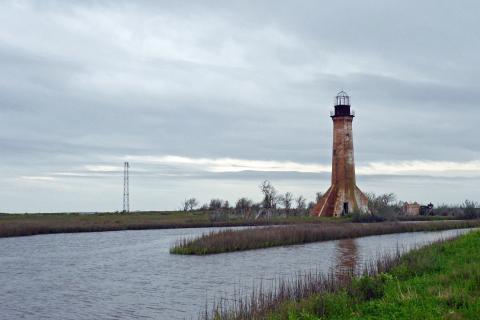 The Calcasieu and Sabine Rivers empty directly into the Gulf of Mexico. Because their mouths were shallow and because only negligible cargoes were available upstream, neither gained much favor among early navigators. Until jetties at the river mouths helped to broaden and deepen the entrances, neither river was given much attention by mariners or by the U.S. Lighthouse Board. However, by the 1840s, when the Republic of Texas had been annexed as the State of Texas, citizens of both Texas and Louisiana were beginning to recognize the usefulness of these waterways. In 1848, the Louisiana legislature officially petitioned Congress for a lighthouse at the Sabine. Congress answered with a $7,500 appropriation, and dispatched a Navy commander to survey the river mouth. The Navy commander was not impressed by what he saw, and recommended against a lighthouse, saying "the coast is so free from danger in that vicinity, the place itself so easy of access, and the business done there so inconsiderable . . . a lighthouse is not necessary there at this time."

The newly formed Lighthouse Board disagreed wholeheartedly in 1851, and quickly recommended a first-class seacoast light with an impressive budget of $30,000. Facing pressure from the Texas-Louisiana faction, Congress provided the funds, subject to a U.S. Coast Survey of the pass. The surveyors chose a spot on the Texas side of the river, two and a half miles from the mouth. However, Captain Danville Leadbetter, the Army engineer tasked with designing and building the lighthouse, rejected the location and instead selected Brandt Point on the Louisiana side.

The tower was built on a mud bank only three feet above tide. The tower's base and foundation were unique in construction. Rather than choosing to ground the tower upon a ring of pilings, Captain Leadbetter built 8 fin-like buttresses to spread the tower's weight evenly across the soft soil. This gave the tower a somewhat rocket-like appearance, and provided it with sturdiness and stability. The tower was lit in the spring of 1857, displaying a steady white light interrupted by a flash 85 feet above sea level.

Towards the beginning of the Civil War, the light was extinguished by Confederate authorities. In January of 1862, the lamp, lens, and clockwork were dismantled and crated up for storage. The keepers were kept on by the Confederates, and paid for taking care of the tower and the rest of the lighthouse property. In September of 1862, they stole away to Maine and rejoined the Union, to which they promptly applied for pay during their service in the Confederacy, reasoning that they were actually caring for Federal property. Their request was denied.

During the rest of the war, the lighthouse was the location for several bloody skirmishes. Union Navy landing parties took on a habit of using the tower to spy on enemy defenses and gunboats. Twice in April 1863, Union landing parties were ambushed and repulsed by Confederate forces who had grown wise to the Union's habit. A large-scale attack on Sabine Pass in September of that year ended with 50 killed and over 200 wounded.

Once the war was over, the lighthouse was restored to service, its original lens having been located and re-installed.

The lighthouse was discontinued in 1952 and retained by the Coast guard for two years until arrangements could be made for proper transfer to the State of Louisiana for use as a wildlife refuge. In 1986 the property was transferred to a private owner.