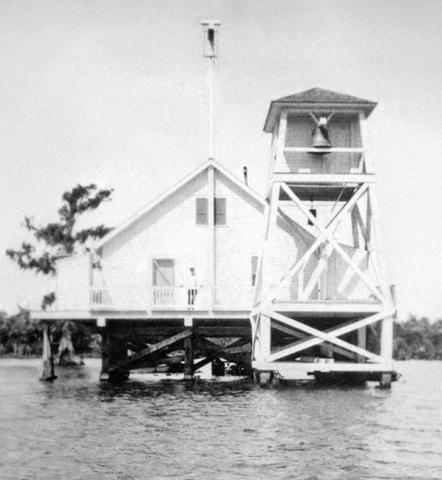 Though the name "Amite" is derived from the Choctaw word Hamitta, which means "young," the Amite River certainly has a lot of history. In the late 1700s, the banks of the Amite were ripe with sugar cane; later they held cotton fields. In the first decade of the 1800s, a Spanish trading settlement sprang up at the mouth of the river, guarded by a dozen Spaniards and a few bad cannon. In the War of 1812, General Andrew Jackson's men blocked Bayou Manchac above the Amite to prevent the British from reaching the Mississippi.

Despite its interesting and diverse history, the Amite River was not marked by a light until the 1880s. The Lighthouse Board had received funds to mark the Amite as early as 1856, but as they were unable to acquire land for the station, the project was abandoned. Soon, the Civil War prompted a shift in priorities, and it was not until 1880 that the Board once again petitioned Congress for the money to build a light on the Amite. Congress offered $3,000, and though the amount was small, the Board was able to erect a minimal station in 1882.

Just after the station's completion, the entire structure settled two and a half feet into the cypress bog. It was raised and the pile foundation improved. It is somewhat debatable if the structure raised on the Amite can even be called a lighthouse. There was a light and there was a house. The Amite's keepers hoisted a small tubular lantern on a mast over the dwelling's roof, 45 feet above the lake.

The station was replaced in 1934 by an automated acetylene lamp.