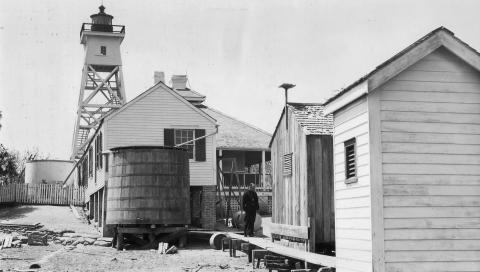 Barataria Bay Light Station, erected in 1857, was one of four lighthouses established around the same time by Army Captain Danville Leadbetter, the district lighthouse engineer. Following a similar plan to the lights at Sabine Pass, Timbalier Bay, and Aransas Pass, the octagonal brick tower held a fourth-order Fresnel lens 60 feet above sea level, showing 270 degrees. Due to a problem in shipping the lens to the station, the Barataria Bay light was not shown until nearly 7 months after the other three lights.

After two years of operation, the light was discontinued as an unnecessary expense. During the Civil War, however, a light was shown from the tower to help guide troops through the marshes. After the war, the station was refurbished and reopened, returning to normal operations on January 10, 1865.

In 1893, a hurricane ripped through the area, causing disaster and completely wrecking the station. Nearly half of the more than 1,500 locals were reported missing after the storm. The Lighthouse Board eventually decided to replace the tower, and in 1897 a square, timber-frame tower was erected. The 66-foot tower displayed a fourth-order Fresnel lens 77 feet above sea level.

Just after World War II, the station was automated by the Coast Guard and tended by USCG personnel stationed at the Grand Isle station.