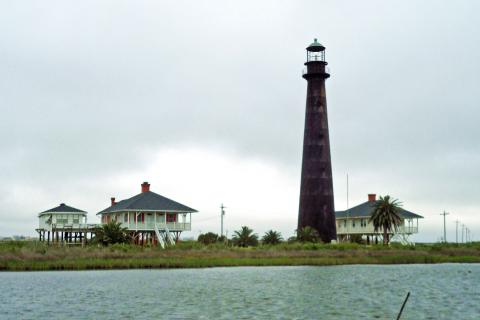 Before it achieved statehood, the Republic of Texas intended to build a lighthouse at Galveston. Once the Republic became a State, the Federal government announced similar plans, and in March of 1847, $15,000 was appropriated for the lighthouse project. The most likely place for the new light seemed to be Fort Point on Galveston Island, but local shippers quickly directed the government's attention to Bolivar Point as the ideal location. A light there could help to guide ships through the narrow channel without requiring other bearings, while a lighthouse at Fort Point could only serve as a landfall light.

As the project began, its trajectory soon began to mirror that of the Matagorda Island Lighthouse. It was stalled early on by difficult negotiations with the landowner of the site, who claimed that his land's value was equal to township lots rather than open farmland. The landowner demanded $9,000, which would require further appropriations from Congress. After nearly two years of fighting over the price of the land, a small two-acre plot was purchased for just $1,000. The next obstacle was the Texas legislature, which neglected to cede jurisdiction of the land until 1851. Galveston Customs Collector William R. Smith publicly accused the governor and his aides of deliberately sabotaging the construction of the lighthouse. The attorney general and his cronies were particularly instrumental in the delay, as they preferred to spend time promoting their railroad enterprises. As a result, the unspent money lapsed into the surplus fund, and Congress was forced to reappropriate funds the next year.

As the years passed, the government began to grow anxious to establish a light of any sort at the Galveston port, which was quickly becoming the busiest in Texas and one of the busiest on the Gulf. Because the lighthouse had still not been built, a lightship was placed at the Galveston bar in 1849. Once the real estate issues had been settled, the Treasury Department issued plans for an iron lighthouse on Bolivar Point. The tower was pre-fabricated by Murray and Hazlehurst of Baltimore, and later erected at the site at the same time that the Matagorda Island light was established. Construction began at Bolivar Point in February 1852 and was completed by October, just in time for the formation of the new Lighthouse Board. One of the Board's first projects was to ensure that all American lighthouses were illuminated by modern Fresnel lenses. However, the Bolivar Point Light was lit in December of 1852 with the old-style reflectors, as the Board was still working to ship Fresnel lenses from France.

Unfortunately, within a few months of its lighting, complaints about Bolivar Point's inadequacy began to reach the ears of the Lighthouse Board. In 1853, Navy Lieutenant Montgomery Hunt, the Galveston Lighthouse Engineer, made the argument that the port required a lighthouse visible more than 14 miles offshore. He recommended raising the Bolivar Point Lighthouse by at least 25 feet and improving it with a real Fresnel lens. Eventually, in 1857, his suggestions were followed. Engineers assembled materials to elevate the lantern 25 feet, and iron sections flared out from the top of the lighthouse so that it could receive the new, larger third-order lens and hold it 100 feet above sea level. This work was completed by 1858.

The Bolivar Point Lighthouse had an interesting Civil War experience. During the war, it was common for lighthouses to be pillaged of their lenses and lantern equipment by Confederate forces in order to slow the Union advance, but for the Bolivar Point Lighthouse, the lens and lantern equipment were just the beginning. Upon receiving orders to remove and safeguard the lens, the Galveston superintendent of lights took the orders a little farther than any of his counterparts. The entire lighthouse was dismantled, plate by plate, and lowered by block and tackle to the ground. The brick lining was taken down, and even the granite foundation stones were dug up and taken away. Buoys from the Galveston Bay were removed and taken to Confederate forts, where they served as water tanks.

After the war, the iron components of the lighthouse were never found. The Lighthouse Board presumed, probably correctly, that they were used up in the frantic search for iron that the South underwent during the war. Iron had become a precious metal, and the South was unable scrambling for it. The iron skin of the Bolivar Point Lighthouse likely became protection for Confederate gunboats.

While plans to replace the lighthouse were being drawn up, a temporary wooden tower was erected in August of 1865, holding a light 40 feet above sea level. A lightship was added in 1869 to help replace beacons that disappeared during the war and in subsequent stormy weather. In 1870, Congress authorized the necessary funds to rebuild the tower, but yellow fever epidemics in and around Galveston and New Orleans prevented prompt attempts at reconstruction.

By 1871, the new tower was under way. The Lighthouse Board chose to recast the tower from the original plans, and though it had hoped to move the tower slightly, land negotiations once again proved difficult. Eventually, Lighthouse Engineer Max Bonzano laid a new foundation on the original reservation. The new tower was fabricated in New York City and shipped to the site. The tower was erected and lit by November of 1872.

During the Great Hurricane of 1900, which leveled the city of Galveston, the Bolivar Point Lighthouse was pounded by the furious wind and waves. Swaying and moaning in the screaming wind, the tower became a refuge for all who could reach its iron door and stairs. Passengers from a nearby stranded train were among the first to wade to the tower when tides had risen a foot or more around the lighthouse's base. All in all, more than 125 terrified neighbors and travelers huddled on the iron stairs during the storm. Trapped by the swirling waters, they were without fresh water. The keeper held a bucket against the wind from the gallery of the tower, 117 feet above the sea, but he could still only catch salt water, even at that height. When the winds and tides subsided, the lighthouse was surrounded by dozens of bloated bodies. The keeper fed and clothed the survivors, exhausting his month's supply of food at the station.

Calamity struck again in 1915, as Galveston was pummeled by another hurricane. This time, 60 people sheltered in the tower, which shook like a reed in the wind. Water rose nearly neck deep at the base of the tower, and the iron doors were torn open. When the lens clockwork was put out of commission by the swaying of the tower, the keepers turned the lens by hand until the tower's convulsions made it impossible to rotate the lens.

Eventually, in 1918, the lighthouse was downgraded to a landfall light. It was discontinued in 1933 and is now privately owned.