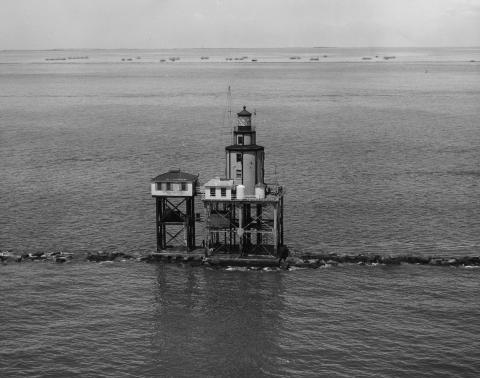 As the nineteenth-century drew to a close, Texas's Galveston Bay was becoming one of the most heavily trafficked ports in the southeastern United States. However, its increased business led to a need for serious development. As the port became more popular, it was quickly established that the largest of the then-modern steamships could not enter the bay's narrow mouth. The construction of jetties was required, and in turn, so too the construction of a lighthouse to mark the jetties themselves.

Construction of the jetties began in the 1880s, and once significant progress was made, the local engineers petitioned the USLHB for the construction of a jetty lighthouse. In October of 1897 a temporary light was placed at the end of the jetties. Congress had granted the USLHB $35,000 to build a permanent jetty lighthouse, but the board would spend quite a bit of time drawing up plans for a permanent station. Their first plans involved a standard iron-pile type foundation with a wooden dwelling on top. However, these quickly changed when the board witnessed the terrifying destruction of the Hurricane of 1900. The plans shifted to accommodate a ferro-cement castle atop I-beams driven into the jetty rocks.

Work began on this design in 1905, but was continually halted and re-begun due to lack of funding, changes in the plans for the jetties themselves, weather, and war. In 1911, the first iron pilings were twisted and bent by another hurricane, forcing work to start over. In 1915, yet another hurricane struck, and the structural steel of the tower itself was bent. The lens, a third-order Fresnel which was being stored ashore, was also damaged. During this time, the blueprints for the tower underwent almost constant change to strengthen and modify it.

By the time the station was completed and ready for lighting in June of 1918, military authorities ordered a port blackout in order to avoid aiding German U-boats. The lamps were finally lit by keeper George W. Baldwell on November 12th, 1918, the day after the World War I armistice was signed.

The lighthouse operated consistently from then until 1973, suffering little from subsequent storms. The tower was automated in 1973 when safety hazards began to threaten the keepers. The ties holding the iron piles had rusted through, and the concrete base for the support beams had begun to crack. In the early 1980s, more modern lights were built by the Coast Guard, and the old jetty light was deactivated.

In May of 2000, a violent storm struck the bay, and the aging lighthouse structure toppled over into the water.