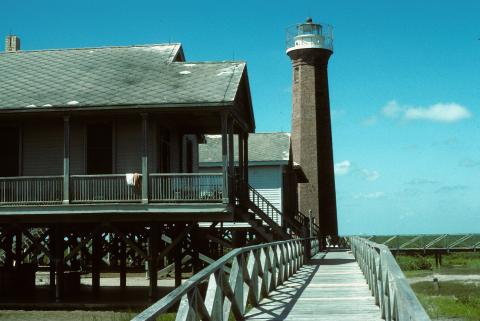 Built in 1855 to provide access to a more direct route to Corpus Christi, the Aransas Pass Lighthouse was 4 or even 5 years in the making. Originally, mariners wishing to make their way to Corpus Christi would use Pass Cavello, a less direct but much safer route than Aransas Pass. Aransas Pass was known for its fickle shoals, shifting channel, and breaking surf. However, in 1851, upon urging from the locals, Congress appropriated the money for a lighthouse to be built, after such time that the Coast Survey could select a site.

At this time, the administration of lighthouses was shifting from the Fifth Auditor of the Treasury to the newly established U.S. Lighthouse Board. Before the board took control, civil engineer I.W.P. Lewis drew up plans for a 65 foot screwpile lighthouse with an iron dwelling at the top. The Coast Survey, however, recommended the placement of a lightship of at least 40 tons, claiming that a lighthouse built in the pass would have no certainty of standing even five years. The survey cited the same issues already known to mariners, and added that the St. Joseph and Mustang Islands habitually shifted wildly during storms, and the charted channel rarely agreed with the actual one.

By 1853, the new Lighthouse Board was in full control of lighthouse administration, and ordered a new survey of the pass. The new survey showed that the crooked channel had straightened out and had shifted to the south, aligning with Low Island and making construction more possible. The local engineer modified the plans previously drawn up by Lewis, and resubmitted them to the board. However, these were immediately rejected by the Chief Engineer.

New plans were ordered, begun from scratch. These called for a rather conventional round brick tower, 50 feet tall with 5 feet under water. Once again, however, the design was discarded, but this time a similar one replaced it. The final design was for an octagonal brick tower, a new approach taken by Army Captain Danville Leadbetter in New Orleans. The 50 foot Aransas Pass Lighthouse was completed in 1855, albeit on borrowed funds. As engineering and real estate negotiations dragged on, the board had diverted the original congressional appropriation elsewhere. It seems that money intended for a New York project found its way down to Texas for the completion of Aransas Pass, and government auditors never caught on.

The lighthouse operated undisturbed in its early years, but suffered heavily during the Civil War. The Confederate customs collector at Saluria removed its Fourth-Order Fresnel Lens and lamps in November of 1861. These were removed to Matagorda Bay, where they remained throughout the war and after, until they were found by a U.S. Treasury Special Agent in May 1866, mostly in usable condition. The lens was taken to New Orleans for repair and then restored to the lighthouse in 1867.

The brick structure itself, however, underwent a much worse fate than the lens. Union blockaders, perhaps bored by lack of action, fired on the tower. Some shots missed, some did not, but the tower seemed to survive relatively unscathed. However, as the war went on, the Confederate authorities began to fear that the lighthouse furnished the Union with too many advantages. Troops were ordered to explode gunpowder in the tower. Surprisingly, only the top 20 feet of brickwork was damaged.

Restorations began in 1866 and continued throughout the winter. They were slowed, however, by a "Texas Blue Norther," which turned the water to an icy slush and threw frozen fish up onto the shore. Finally, after the weather passed, the lighthouse was relit on April 15th, 1867.

The station suffered heavily during the hurricanes of 1916 and 1919. During both events almost all of the outbuildings were destroyed, though the tower remained firmly intact.

In 1952, a major shift of the Aransas Pass Channel reduced the need for a lighthouse. The station was now a full mile from the entrance. A light placed on the roof of the nearby Coast Guard station replaced it. The property is now privately owned by Charles C. Butt, CEO of HEB.