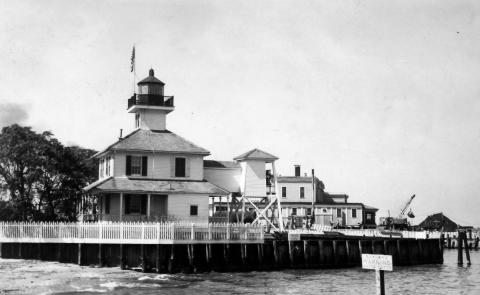 In the 1830s, in an effort to increase the ease with which shippers could move cargo between Lake Pontchartrain and New Orleans, a private company excavated a toll canal to connect these fast-growing places of trade. The toll canal was creatively named "New Canal", in an effort to distinguish it from the old Canal de Carondelet and Bayou St. John. It was a significant improvement over the shallow, winding bayou, and shippers using this new route could avoid the cargo handling at Port Pontchartrain rail depot altogether. New Canal extended to near the Union Station, about five and a half miles from the lake.

Before the excavation was even complete, Congress authorized $25,000 in 1837 to mark its entrance and approaches. By September of that year, the New Orleans collector had fixed a site for the lighthouse and keeper's dwelling. The tower was constructed out of local cypress by Francis D. Gott of New Orleans for $4,500, and was first lit in February 1839.

By 1843, the tower's lower timbers had rotted, and the structure began to cant over dangerously. It was not until 1853 that the Lighthouse Board renewed the foundation piles, in the hope that they would hold until a replacement tower could be built. The new tower was constructed in May of 1855, a square wood dwelling on screwpiles, holding an iron lantern atop its hipped roof. It displayed a fixed fifth-order Fresnel lens 33 feet above the lake. The original tower continued to stand on its decaying pilings, always in danger of tumbling over into the water.

The lighthouse remained fairly active during the Civil War, and survived the war with little damage. In 1881, the board considered retiring the station, as changes in the mouth of the canal had rendered the location of the tower ineffective. The light was reportedly not of much use, especially because its light was not even high enough to clear the top of a nearby yacht club. But, as the board considered the New Canal light to be at least more important than the Bayou St. John light, it was not discontinued but heightened. A two-story superstructure was mounted on the original iron piles in 1890. This structure held the light 49 feet above the lake, and was first lit on June 2, 1890.

Hurricane damage in 1926 convinced engineers to raise the tower onto concrete piers, which had the effect of increasing the elevation of the light to 52 feet above the water. The light, which was once 1,000 feet offshore, now stood at the edge of the levee. Landfill projects had created the sprawling Lakefront Park, with the lighthouse as its most prominent feature. In 1936, the breakwater around New Canal light was filled in, placing the lighthouse on dry land for the first time.

Even after the light itself was discontinued, the light station operated as an active Coast Guard rescue station until 2001. Though the station had survived over a century of harsh weather, in 2005 it was partially destroyed by Hurricanes Katrina and Rita. In 2006, the Lake Pontchartrain Basin Foundation entered into a collaboration with the Coast Guard to repair the damaged lighthouse. It was taken apart and the scraps were put into storage. Reconstruction of the lighthouse began in 2012 and was completed in 2013. This replica of the lighthouse has its own entry, found here. More information on visiting the replica can be found here.