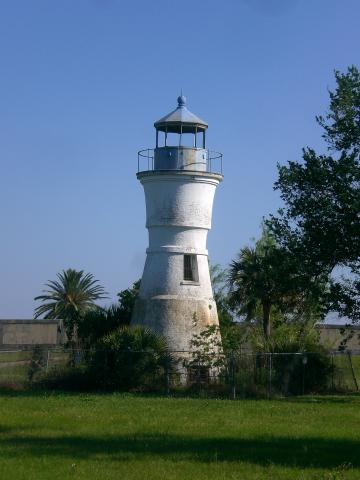 The Port Pontchartrain Lighthouse, located near to Milneburg on Lake Pontchartrain, is a lighthouse whose creation was driven almost as much by rail travel as it was by water travel. Milneburg's Port Pontchartrain was Lake Pontchartrain's first artificial harbor, built up by Alexander Milne along with a group of investors. As the town and the port's traffic increased, Alexander Milne gathered his fellow investors into a company and built the first steam railroad west of the Allegheny Mountains. The novelty and efficiency of overland rail travel drew passengers away from Bayou St. John and to the docks of Port Pontchartrain. As steamboat traffic to the port increased, so did steamboat accidents; because of this, the railroad company erected Louisiana's only private lighthouse, lighting its square lantern, hung 50 feet above the water, in 1832.

By 1834, complaints of mariners and locals had reached Congress, and $5,000 was appropriated for a government replacement to the private light. The project was stalled, however, as the company deliberated with the Treasury Department, hoping to sell the light it had erected in 1832. In 1836, U.S. Port Surveyor John Bingey added his experienced voice to the push for a real lighthouse - he cited the wrecks of four steamers, five sailing vessels, and numerous deaths caused by the lack of a proper light. In 1837, Congress appropriated an overwhelming $25,000 to the Treasury Department for the construction of a lighthouse and other aids to navigation at Port Pontchartrain. Once again, disputes delayed the construction for two more years, but finally, in February of 1839, the light was completed, and lit by its first keeper, Benjamin J. Shane.

The lighthouse constructed in 1839 was an octagonal wooden tower, which cost only $4,400 of the appropriated $25,000. It measured 28 feet in height and 18 feet in diameter, with a chandelier that revolved to show a flashing light. By the 1850s, Milneburg had drawn traffic from ports as far away as Mobile. The Coast Survey reported more than a half million tons of cargo passing through Port Pontchartrain each year. In 1854, Congress appropriated $6,000 for a new lighthouse to match the newly increased traffic of the port. Engineer Captain Danville Leadbetter proposed a substantial brick tower built upon the lake bottom, even though most lake lighthouses of the time were built atop screwpiles. The lighthouse was begun in October of 1855 on a broad concrete pad, and completed by the end of the year. The lighting apparatus from the original tower was placed in the new tower, and in 1857 the old lantern was replaced by a Fifth Order Fresnel Lens.

During the Civil War, Charles Fagot, keeper of the Port Pontchartrain light, was the only lightkeeper to man his post throughout the entire conflict. Fagot was employed by the Lighthouse Board before the war, the Confederate States government during the war, and then again by the board afterwards, maintaining his duty to the light and to the local mariners the entire time. In 1864, the 1839 tower was taken down, and its scraps used to build a walkway over the lake to the railroad pier.

In 1880, masons flared out the top of the brick tower, raising it seven feet, and allowing for the installation of a new lantern, now held 42 feet above the lake. From then until the light station's closure in 1929, the keepers of the light were exclusively women. One of these women, Margaret R. Norvell, was publicly recognized in 1903 for hosting 200 refugees at the light during the "Chediere Caminada" hurricane. Norvell served nearly 29 years at the lighthouse, the longest of any of Port Pontchartrain's keepers. On May 29th, 1929, the lighthouse was discontinued, as rail service had long moved far enough to take passengers to larger destinations, and boat traffic had decreased significantly. The lighthouse was once 2,100 feet offshore, but landfill projects have since surrounded it with dry land.