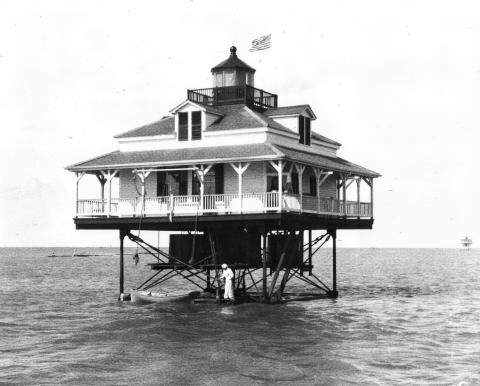 1854: The original Redfish Bar Lighthouse was erected in 1854. It was square, painted white with red, horizontal stripes, and mounted on screwpiles. The original light held a cheap, pressed-glass lens 35 feet above sea level. These were replaced by a sixth order lens and a new lantern in 1856.

1868: After the Civil War, all that remained was the set of screwpiles, and evidence that seemed to indicated the lighthouse had been burned by Confederates. The lighthouse was rebuilt on the same screwpiles and was once again given a sixth order lens.

1900: By the 1890s, a ship channel had breached Redfish Bar, and the lighthouse was no longer ideally located. As the building was decayed badly, moving it to a new foundation was not possible. Instead, the Light-House Board appropriated money for a new lighthouse to be built in 1900. This lighthouse held a fifth order lens 39 feet above the bay until it was dismantled in 1936 in favor of the use of channel lights on pilings.