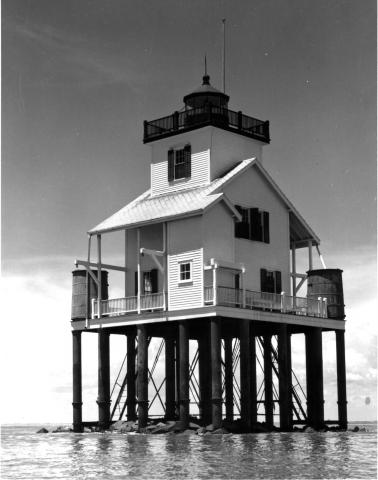 Timbalier Bay has long been considered one of Louisiana's most difficult waterways. For many decades, it was marked on private charts as impossible to navigate. The first U.S. Coast Survey into the bay found enough depth for steamers, but recommended a lighthouse to guide vessels through the treacherous waters. At the petitioning of the Lighthouse Board, Congress approved $15,000 for a lighthouse at Timbalier Bay. The station was built in 1857 and displayed its first light that June.

The station went dark for most of the Civil War, and being less important than other lights nearer to New Orleans, it was not relit until September 1865. In 1866, the station began to be threatened by erosion. After two of the brick piers washed away in bad weather and the water rose three feet around the lighthouse, the keeper promptly resigned. The local engineer removed the lens to the keeper's dwelling for safekeeping and displayed a temporary light from the dwelling's roof. One month later, the entire station was annihilated. The new keepers tried to tend the temporary light in the dwelling, but it was also demolished by the gale-driven seas. Barely escaping with their lives, the keepers clung to an iron can buoy, bobbing about in the storm for several days.

With the station completely gone, the Lighthouse Board immediately proposed a replacement. The Board petitioned a resistant Congress for years to obtain the funds to build an iron skeleton tower on Timbalier Island, where it would be sheltered from the open seas. Congress finally approved the funds for a new tower, which was not built and lit until 1875. The revolving second-order Fresnel lens showed a fixed white light with a red flash every minute.

In 1881, the lens refused to rotate because the tower was tilting out of plumb. Nine of its iron leg sockets were cracked. The tower was repaired and the lens leveled. In 1894, the lens once again stopped because of the tower's canting. A new channel was forming at the base of the tower, where the tidal wash was scouring sand from around the screwpiles. The damaged lens was saved, but a lighthouse tender was unable to approach closely enough to the tower to try dismantling the iron framework itself. The tower slowly twisted downwards and then crashed into the bay. A lantern was displayed from the keeper's dwelling until a replacement tower could be built in 1917.

The third Timbalier Island Lighthouse was a white square dwelling surmounted by a lantern, raised up on 25 iron-encased wood pilings. Even this substantial foundation could not resist the forces of nature. In 1926, a hurricane tipped the lighthouse to the northwest, almost knocking it over. The next year, the lighthouse was straightened, and 500 tons of riprap were placed around the piles, only to be washed out in 1931. Because a deep hole was beginning to form under the tower, a buoy was recommended to replace the lighthouse. The station was discontinued in 1934, but was reactivated after only a few months. The Timbalier Lighthouse was automated in 1939 and left unmanned.